In this series of conversations, Kathryn Goldman Schuyler introduces viewers to leaders who dance with possibility, whose creativity, depth, and vision bring leadership to life — people from many arenas whose lives add vitality and meaning to our planet.

Rasmus Hougaard is founder of Potential Project. His new book co-authored with Jacqueline Carter is Compassionate Leadership: How to Do Hard Things in a Human Way. Potential Project is a global consulting organization “on a mission to create a more human world of work … by helping leaders and teams to understand and manage their minds, which is where all potential for great things begins.”

Rhonda V. Magee is a Professor at the University of San Francisco School of Law and an internationally-recognized thought and practice leader focused on integrating mindfulness into higher education, law, and social change work. She is the author of The Inner Work of Racial Justice: Healing Ourselves and Transforming Our Communities Through Mindfulness (Random House, 2019).

Kathryn Goldman Schuyler interviews Matthew T. Lee, Director of Empirical Research at the Human Flourishing Program at Harvard University. In this conversation, Dr. Lee describes the importance of thinking about and planning for flourishing at this time of global crisis. Part of the series Leading Amidst Global Uncertainty.

Kathryn Goldman Schuyler interviews Subhanu Saxena, Director, Innovation Introduction, the Bill and Melinda Gates Foundation. In this conversation, Subhanu describes the challenges of introducing innovations in healthcare in the developing world that can make a difference during this global pandemic. Part of the series Leading Amidst Global Uncertainty.

Kathryn Goldman Schuyler interviews Max Klau, Chief Program Officer of the New Politics Leadership Academy, a non-partisan non-profit dedicated to recruiting and developing military veterans and alumni of national service programs to seek political office. In this conversation, Dr. Klau describes the importance of such servant leaders for democracy at this time of global crisis. Part of the series Leading Amidst Global Uncertainty.

Kathryn Goldman Schuyler interviews Riane Eisler, President of the Center for Partnership Studies and visionary author of global best-seller The Chalice and the Blade (1987) and other influential books. They address the value of distinguishing between partnership and domination-based societies and why thinking about the value of partnership may be particularly important during this period of global crisis. Part of the series Leading Amidst Global Uncertainty.

Kathryn Goldman Schuyler interviews Rob Chesnut, Chief Ethics Officer of Airbnb about ethics in the corporate world and topics from his book Intentional Integrity – How Smart Companies Can Lead an Ethical Revolution.

In this episode, Kathryn Goldman Schuyler interviews Alonzo King, who is Choreographer, Artistic Director and Co-Founder of LINES Ballet, who has been named Artist in Residence for San Francisco’s Grace Cathedral for 2019-2020. King has been called a “visionary choreographer” who is altering the way we look at ballet.

Kathryn Goldman Schuyler interviews Alonzo King, Founder/Artistic Director/Choreographer of Alonzo King’s LINES Ballet in San Francisco, California, who has been named Artist-in-Residence for San Francisco’s Grace Cathedral for 2019-2020. King has works in the repertories of the Royal Swedish Ballet, Frankfurt Ballet, Joffrey Ballet, Alvin Ailey, Hong Kong Ballet, Hubbard Street Dance Chicago and many others. Since launching the company in 1982, he has collaborated with distinguished visual artists, musicians, and composers across the globe including Pharaoh Sanders, the Kronos Quartet, Jason Moran, Vân-Ánh Vanessa Võ, and Zakir Hussain. King was recently granted an honorary doctorate by the Juilliard School.King’s parent were civil rights leaders: as a child he grew up around Malcolm X, Martin Luther King, and other leaders of societal change. In the interview, he discusses both his unique approach to ballet and how he was influenced by the environment in which he grew up.

In addition to performing around the world, Lines Ballet offers education programs that go into schools around the Bay Area, conducts a summer training program for young dancers, and co-sponsors a Bachelor of Fine Arts in Dance that is the only BFA offered in the United States led by an active master choreographer.

In this episode, Kathryn Goldman Schuyler interviews Anne Stevens, who has been the most influential woman in the US auto industry, moving on to become CEO of a UK-based global engineering company, GKN plc. Anne knew W. Edwards Deming personally and was deeply interested in quality before it became ubiquitous in industry. Starting early in life in nursing school, she realized quickly that her interests and skills lay elsewhere, and she shifted into engineering. After some years at Exxon, she moved on to Ford Motor Company, where her lifelong love of cars and racing made her feel at home. She ultimately became COO and EVP for the Americas, after being involved in reorganizing the company for the future. Since then, she has led several engineering companies. She shares her experiences with leading in male-dominated industries—and what’s important to her in life.

Ed and Peter Schein—
In this episode, Kathryn Goldman Schuyler interviews Ed and Peter Schein. For decades, Ed Schein has been a respected global thought leader — for his work developing process consultation, career anchors, and for his application of the notion of culture to organizations. His thinking, consulting, and books have nourished the practice of organization and leadership development consultants around the world. He and Peter now work together in the Organizational Culture and Leadership Institute (OCLI) and co-authored the recent book Humble Leadership (2018).

In this episode, Kathryn interviews Ed Schein and Peter Schein, co-authors of Humble Leadership (2018), who together co-lead the Organizational Culture and Leadership Institute (OCLI)—dedicated to advancing organizational leadership and design through a deeper understanding of organizational culture and career development.

KKathryn Goldman Schuyler has many years of experience in leadership development, organizational consulting, research, and somatic learning. She has helped hundreds of executives to cultivate healthy organizations and is Professor Emeritus of Organization Development at Alliant International University. Kathryn has published widely on leadership and change and is the author of Inner Peace – Global Impact (IAP, 2012) and the lead editor of Leading With Spirit, Presence, and Authenticity (Jossey Bass/Wiley, 2014), and Creative Social Change: Leadership for a Healthy World (Emerald, 2016). Her recent research focuses on awareness and mindfulness at work: her published work in this area highlights how being fully present enhanced participants’ connectedness with others and with the natural environment and renewed their sense of purpose in their work. In addition to earning a Ph.D. at Columbia University (NY) as a sociologist, she studied with Dr. Moshe Feldenkrais who developed a sophisticated approach to somatic system learning. As a somatic educator, she helps children and adults with moderate to severe neuro-motor challenges to move, learn, and live fully. She has studied mindfulness and awareness with His Holiness the Dalai Lama, Mingyur Rinpoche, Lama Tharchin Rinpoche, and other masterful teachers of meditation. Kathryn and her husband, a composer, live overlooking San Francisco, a view that encourages them to pause and appreciate gleaming sunsets and foggy mornings, the calls of ravens and the circling of hawks, and the sparkling city lights.

Ed Schein is Professor Emeritus of the Massachusetts Institute of Technology (MIT) Sloan School of Management and is a founding father of many areas of organization and leadership development. He has been awarded the ILA’s Lifetime Achievement Award as well as comparable awards from the Academy of Management and the International OD Network. He was educated at the University of Chicago, Stanford University, and Harvard University, where he received his Ph.D. in Social Psychology. He has published extensively — Organizational Psychology, 3d Ed. (1980), Process Consultation Revisited (1999), career dynamics (Career Anchors, 4th ed. With John Van Maanen, 2013), Organizational Culture and Leadership, 4th Ed. (2010), The Corporate Culture Survival Guide, 2d Ed., (2009), a cultural analysis of Singapore’s economic miracle (Strategic Pragmatism, 1996), and Digital Equipment Corp.’s rise and fall (DEC is Dead; Long Live DEC, 2003). Helping (2009) conceptualizes a general theory and practice of giving and receiving help, while his most recent books focus on humility in Inquiry, consulting, and leadership. He continues to consult with various local and international organizations on a variety of organizational culture and career development issues, with special emphasis on safety and quality in health care, the nuclear energy industry, and the US Forest Service. An important focus of this new consulting is occupational/organizational subcultures and how they interact with career anchors to determine the effectiveness and safety of organizations.

Peter Schein is a strategy consultant in Silicon Valley, providing help to start-ups and expansion-phase technology companies. Peter’s expertise draws on over twenty years of industry experience in marketing and corporate development at technology pioneers. In his early career he developed new products and services at Pacific Bell and Apple Computer, Inc. (including eWorld and Newton). He led product marketing efforts at Silicon Graphics Inc., Concentric Network Corporation (XO Communications), and Packeteer (BlueCoat). He developed a deep experience base and passion for internet infrastructure as the Web era dawned in the mid-1990s. He then spent eleven years in corporate development and product strategy at Sun Microsystems, where he led minority equity investments in mission-critical technology ecosystems. He drove acquisitions of technology innovators that developed into multi-million dollar product lines at Sun. Through these experiences developing new strategies organically and merging smaller entities into a large company, Peter developed a keen focus on the underlying organizational culture challenges that growth engenders in innovation-driven enterprises. Peter was educated at Stanford University, Northwestern University, and the USC Marshall School of Business Center For Effective Organizations.

Yongey Mingyur Rinpoche—
In the second episode, Kathryn interviews Yongey Mingyur Rinpoche, founder of Tergar International. His brain patterns were examined by researchers in ground-breaking studies. Recently he took four years off from his position at Tergar to pursue a “wandering retreat” of meditation and reflection, then returned to lead this unique organization that has a strong presence in both East and West.

Jacqueline Carter—
In the first episode, below, Kathryn is joined by Subhanu Saxena, co-Managing Partner, New Rhein Healthcare and a Regional Director for the Gates Foundation and Jacqueline Carter, International Partner and North American Director for Potential Project. 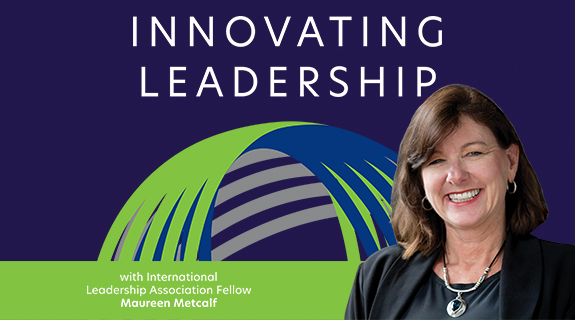 LEADERSHIP FOR A HEALTHY WORLD:
The Role You Play—